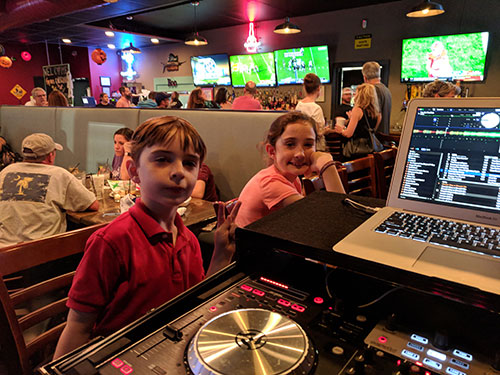 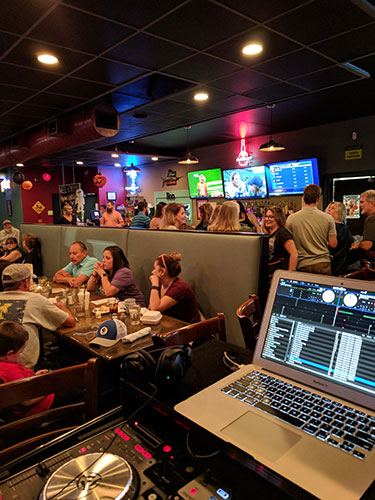 I had the distinct privilege of DJing at the Grumpy Goat Seafood Cantina on Saturday, 6 years after DJing the wedding of the owners, Stephanie + Jack Warren!

For those of you who don’t know, Grumpy Goat is a popular local taco and Tex-Mex spot in the heart of James Island.  Great food, big bar area, and a lot of friendly faces and families.  Stephanie + Jack took over the place a year ago, and have done a great job filling it up with locals.  After having lunch their one day with my kids, my oldest had forgotten his hat and ran back to get it.  Out of the restaurant comes a woman with my kid and I’m thinking “what on earth did he do…” when she says “Hey Josh!”  and re-introduces herself.  I hadn’t seen her since the wedding, and she was in a big white dress that day, so I definitely didn’t recognize her at first.  So glad such nice people are here on James Island.

Anyway, while setting up, I had a chance to talk with the owner’s 3-year old twins, one of whom is a music nut.  He proceeded to tell me about his favorite musician, Sade.   Sade!  At 3!  His parents are doing him well.  We discussed the nuances of Smooth Operator, one of Sade’s classic tracks, which went something like this:

“I like Smooth Operator, but it has a lot of numbers in it…”

“Yeah, Sade works on a lot of levels.  When you grow up, you’ll learn more about the concept of a double entendre”

In the face of the frequently poured beer and tequila (not for me, thanks) there were a lot of kids here celebrating the One Year Anniversary along with the adults.  Kids dancing in the aisles.  Kids making requests for Earth, Wind & Fire songs.  Kids wearing free swag from the tequila girls.  It was quite an evening, and it was just getting started.

The place got packed with people.  All the tables bustling for dinner, a full bar, and even folks on the patio despite the rain earlier in the day.  Much fun.

Lots from the Yacht Rock genre, since the crowd was relaxed, chatty, and upbeat:

The big hit?  Later in the night I got a singalong going (yes, a singalong) to Swingtown by Steve Miller Band 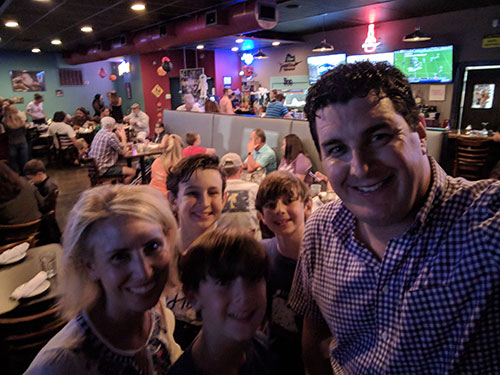 Shout outs go to my family for dropping in and taking up bar space (ha ha…more kids….just what a bartender wants to see), as well as awesome neighbors the Hendersons for coming by.   It seems that young Lou (age 5) is really, REALLY into DJing, and wanted to see it live in action.  It was terrific to see my favorite pursuit translating to a future generation of music fans.  He had a lot of questions about the Serato DJ software, about the track selection, and how “cueing” works.  Happy to show him a few tricks of the trade, and encourage up and coming DJs to throw their hat in the ring.